There is something inherently cool about a re-design of an OTF.  Just seeing how different people make different parks work, things like that.  I am always on the lookout for different designs, creations, and things of that nature.  One of my favorite twists on the classic OTF design happens to be in video game form. 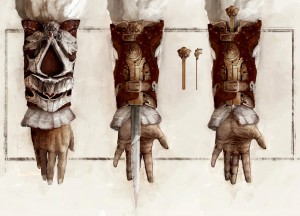 Even If you are not overly familiar with video games, chances are you have at least heard of the Assassins Creed games.  It is an immensely popular video game franchise, with new titles being announced almost yearly, sometimes more.  It is by no means my favorite video game franchise, but it does offer some fun gameplay, and an interesting story.  But something about this franchise that caught my eye, was the “hidden blade”.  In a game where you take on the role of an assassin, it’s to be expected that they are going to have some “covert” and “hidden” weapons.  It was a pleasant surprise to me when I saw that their “hidden weapon” design seemed to stem from an OTF type knife.

Basically how it works:  The assassin has an “OTF” type blade attached to their forearm, as they approach their target, they lift their hand up, extending the blade out the front, and when they are finished it slides back, concealed, into its sheath on the arm.  It is a really genius design, so as not to draw attention.  It’s a really cool use of the “traditional” OTF design.  The idea that an assassin would use this type of weapon feels natural and fluid, and in no way like the developers were just trying to force a cool new type of blade on us.  With each new title added to the Assassins Creed franchise, they are re-designing, and upgrading this fantasy OTF.  So we get to see this awesome OTF idea used throughout history, in Italy, the Caribbean and revolutionary France, evolving through time. 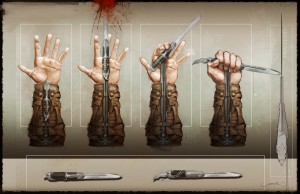 As a fan of OTF’s I was so ecstatic to see a redesign used in such a popular medium.  In a cool way, Ubisoft is bringing this great knife to a whole new generation of potential knife lovers.

As if the digital, video game, version wasn’t enough, loyal fans of the series have taken it one step further. They are actually making real life, working, versions of this OTF.   Just doing a quick google search will pull up hundreds of different fan designs, and re-creations.  It’s great to see how an OTF in a video game has inspired tons of new knife artisans around the world to create, and design their own.  We can only hope that Ubisoft continues to keep this intimidating tool throughout its future games.  Because, at this point, we just can’t get enough of it.  Makes me want to head out and get a brand now OTF, just for the heck of it. 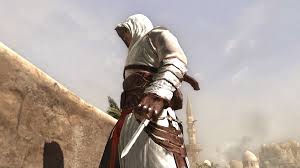 Do you enjoy using this blade in the Assassins Creed games?  Have you tried to make your own?  Let us know in the comments below, we love to hear from you!